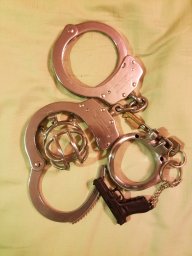 Occupation:
Work for a living

Well after a long time away from everything Im back in the cage again its good to be home. Jan 14, 2020